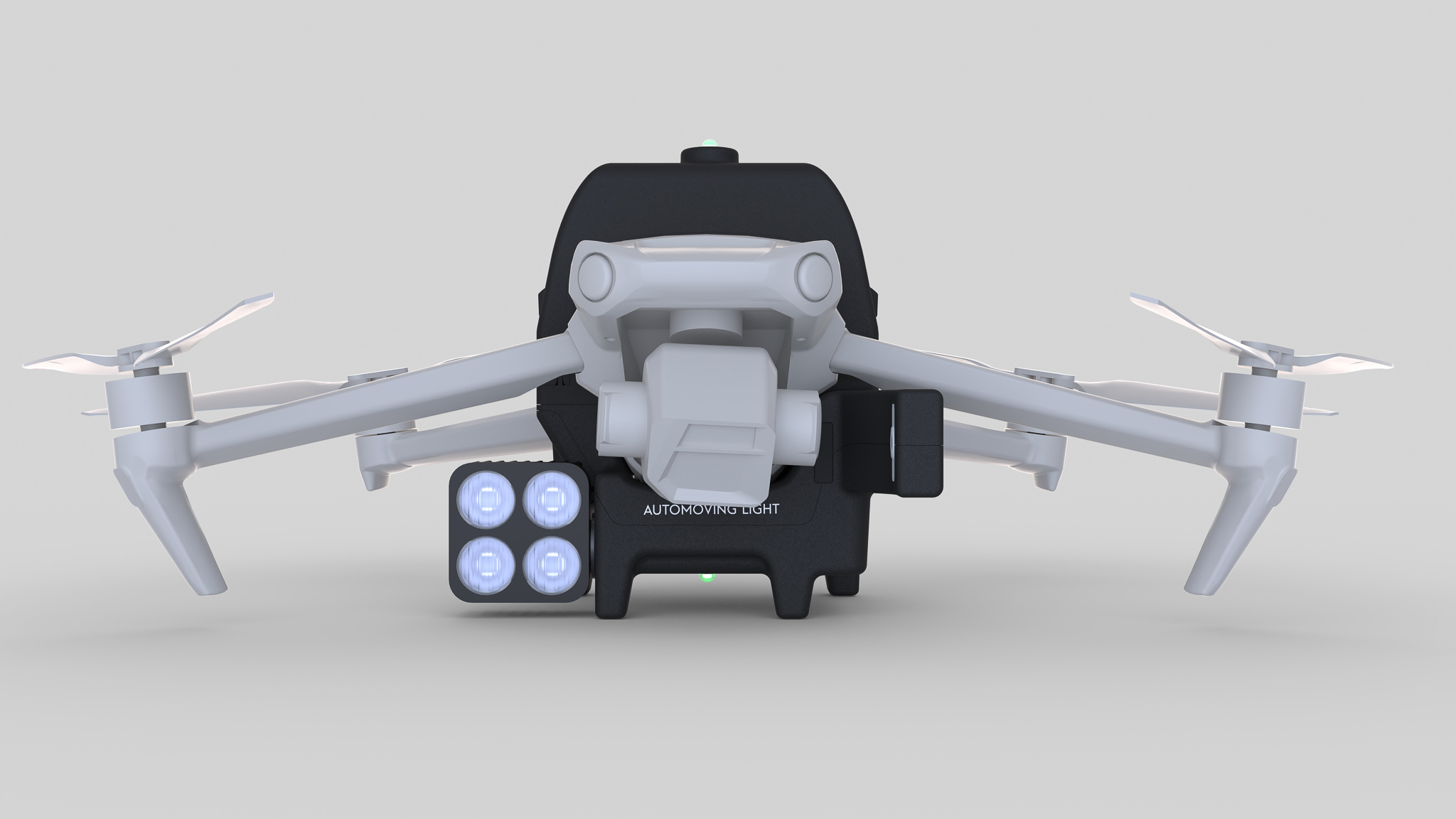 By using our patented Automoving technology, we can illuminate a 14X larger area than a non-moving fixed spotlight.

It’s difficult to use drones in the dark and in low light conditions. We struggle with this every winter in the Arctic circle in Norway when we have three months of no sunlight. That’s why we invented the Automoving light, says CTO and co-founder of Tundra Drone, Tim Valio.

With enhanced lighting from the Automoving light, all the DJI Mavic 3 drones can now be used for many critical applications at night. Search and rescue teams can now use drones to locate missing persons and save people’s lives. Law enforcement and fire fighters can get lighting where they need it the most. When a storm causes power outages, drones with lighting can be used to quickly locate and inspect utility poles that need to be repaired quickly. The Automoving light is suitable for many commercial drone applications at night, says Tor Erik Somby, CEO and co-founder of Tundra Drone.

Illuminates a 14X larger area than a non-moving fixed spotlight

The Automoving light uses computer vision to automatically track the drone camera’s movements and provides optimal illumination in every angle and field of view. By using our patented Automoving technology, we can illuminate a 14X larger area than a non-moving fixed spotlight, says Tim Valio.

The brightest drone light in the market

With 10 000 lumens, drone pilots will get a good overview in the dark and be able to operate much like in daylight. This is the brightest auto-moving drone light for DJI Mavic 3 and Mavic 2 drones on the market, Tor Erik Somby says.

Lighting as long as the drone flies

In full brightness, the battery of the Automoving light will last as long as a drone battery. It can be swapped at the same time as the drone’s battery. The flight time is thus limited only by the number of batteries to the drone and the light. The drone pilot can use the drone’s own remote controller to turn the light on/off when needed.

In many cases, this cost-effective solution could replace the need for large professional drone solutions, use of helicopter, or inefficient third-party (non-moving) lighting. Tundra Drone offers complete tactical responder kits for DJI Mavic 3:

Available now in the US market

Current delivery time is approx. 4 weeks from the time of order. Tundra Drone is partnering with enterprise drone dealers in the US to ensure a wider availability and faster delivery. More information about partners will be published on tundradrone.com.

Tundra Drone makes pioneering payloads for prosumer drones for the global market. The products are designed in Norway and manufactured in EU. The company was established in 2019 by the founders and drone pilots, Tim Valio and Tor Erik Somby. Tim Valio holds a master’s degree in electronics engineering and Tor Erik Somby has a master’s degree in marketing. The Tundra Drone team also consists of a red-dot award winning product designer, several investors and a professional board of directors that support the future growth and development of the company. Today the company also gets support from mentors in the Silicon Valley based company BMNT to enter the US market.

We designed the Automoving light unit to include powerful built-in anti-collision (strobe) lighting for safe and easy night flying.

By signing up you agree to receive email marketing communication from Tundra Drone AS and that your personal information can be stored and processed according to our Privacy Policy.

We use cookies on our website to give you the most relevant experience by remembering your preferences and repeat visits. By clicking “Accept”, you consent to the use of ALL the cookies. However you may visit Cookie Settings to provide a controlled consent.
Cookie settingsACCEPT
Manage consent

This website uses cookies to improve your experience while you navigate through the website. Out of these cookies, the cookies that are categorized as necessary are stored on your browser as they are essential for the working of basic functionalities of the website. We also use third-party cookies that help us analyze and understand how you use this website. These cookies will be stored in your browser only with your consent. You also have the option to opt-out of these cookies. But opting out of some of these cookies may have an effect on your browsing experience.
Necessary Always Enabled
Necessary cookies are absolutely essential for the website to function properly. These cookies ensure basic functionalities and security features of the website, anonymously.
Functional
Functional cookies help to perform certain functionalities like sharing the content of the website on social media platforms, collect feedbacks, and other third-party features.
Performance
Performance cookies are used to understand and analyze the key performance indexes of the website which helps in delivering a better user experience for the visitors.
Analytics
Analytical cookies are used to understand how visitors interact with the website. These cookies help provide information on metrics the number of visitors, bounce rate, traffic source, etc.
Advertisement
Advertisement cookies are used to provide visitors with relevant ads and marketing campaigns. These cookies track visitors across websites and collect information to provide customized ads.
Others
Other uncategorized cookies are those that are being analyzed and have not been classified into a category as yet.
Save & Accept